Description: Chad Alva and his wife Kylie Quinn have heard that Alex Coal is an excellent sex therapist. They've booked a session with her, but when Alex tries to ask what the couple wants, she learns that they don't have a clear goal in mind. Kylie wants Alex to tell her what to do, and Chad becomes standoffish as Alex tries to guide the couple into a communication exercise. He tells Alex that this is the point where the girls double team him. Alex asks whether Chad wants to be double teamed. When Chad doesn't answer, Alex moves on to describing the exercise. She tells Chad and Kylie that she'll be blindfolding them so they can experience a bit of sensory deprivation. Chad isn't sure about this, but Alex isn't taking no for an answer. She prepares the couple and then begins by giving Kylie Chad's hand and telling Kylie to put it anywhere she wants it. Kylie puts her husband's hand on her thigh and lets him stroke her there for a few minutes. Then she shifts Chad's hand to her breast. Spreading her thighs and lifting her miniskirt, Kylie moves Chad's hand to her pussy so he can rub her off over her panties. All the while, Alex is making herself more comfortable on the couch behind the couple. When Alex tells Kylie to put her hands on Chad where she wants them. She's unerring in going right for his hardon. Alex instructs Kylie to push her panties aside and touch Kylie's bare pussy. It's only fair, then for, him to unleash his dick so Kylie can rub bare skin as well. Chad takes a peek beneath his blindfold and finds Alex masturbating behind them, but he doesn't say anything. Coming around to the front of the couple, Alex gets her own hands on Chad's cock as she guides Kylie through rubbing it. Eventually, she urges Kylie to join her in a blowjob. The girls work together in tandem, sucking Chad down in a deep throat BJ and sucking his balls. Still in charge, Alex tells Kylie to climb into Chad's lap and sink down onto his cock. Her hand creeps to her own clit as she watches Kylie ride the D. Fortunately for Alex, Kylie and Chad are both open to continuing to share. She gets her own ride as Kylie watches with hungry eyes. Throwing herself onto her back, Alex spreads 'em for Chad to dive even deeper as Kylie masturbates behind her. Kylie is next up, getting on her hands and knees. A doggy style pussy pounding is just what the therapist ordered! Under Alex's watchful eyes, Chad bangs Kylie until he's about to pop. He pulls out just in time for Alex to guide his cum shot all over Kylie's ass, the perfect ending to the first therapy session, but not their last. 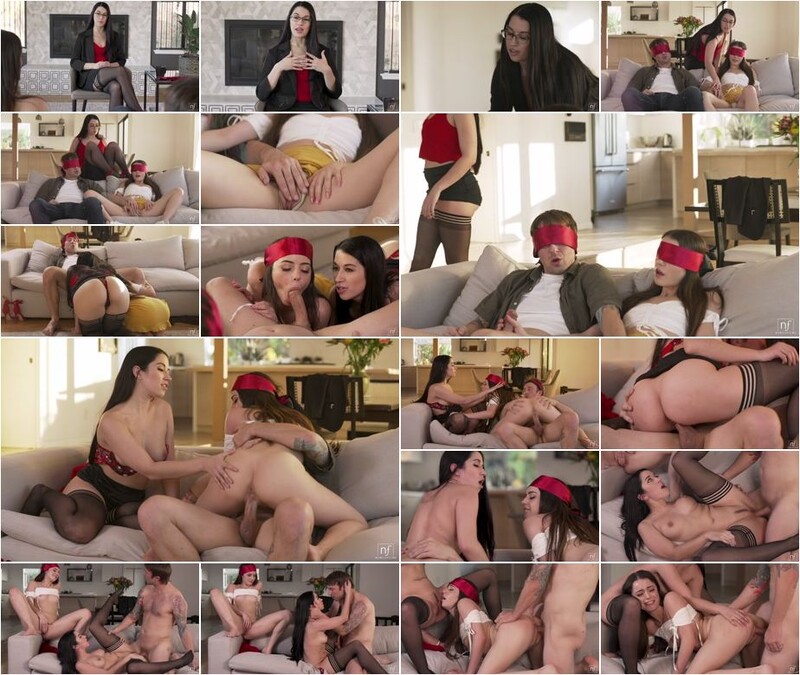