Description: What would happen if three families each contributed one member to create a new family? In this episode of Family Swap, Haley Spades has a bad dream so she gets out of bed in her PJs and goes to sleep with her swap parents, Eve Marlowe and Charles Dera. Spooning against Charles, Haley is just starting to get comfy when Eve wakes up and kicks Haley out. Haley tries to sneak back into the bedroom and get a peek at her swap dad's dick, but when she pulls the covers up she sees that Eve's pubes are blue. When Eve calls Haley out on being back in the room, Haley expresses her surprise. That softens Eve almost immediately. Pulling Haley into the bed, Eve lets her swap daughter express her curiosity by touching the blue pubes. Eve goes on to suggest that maybe Haley would like to touch her swap dad's dick, too. Of course Haley wants. She reaches out to touch Charles's cock, which is already nice and hard. It's not a big stretch from there for Eve to offer her big tits for Haley to suckle and explore. There's no stopping this swap family now, especially not once Eve and Haley decide to share Charles's dick in a blowjob that only whets all of their appetites for something more hardcore. Easing Haley onto her knees, Eve helps her out of her PJs. Then she makes sure Haley's cooch is nice and wet before getting Haley to straddle Charles's cock and sink down in reverse cowgirl. Rubbing Haley's clit and tonguing Haley's nipples, Eve does whatever she can to double down on Haley's pleasure. The girls swap spots so that Eve can ride while Haley puts everything she's learned so far to work. Then Eve gets on her hands and knees to demonstrate a proper pussy feast technique on Haley even as Charles fucks Eve from behind. Haley gets to enjoy another round with swap daddy as Eve cradles her head in her lap and Charles kneels between her thighs to bang her. Charles even rewards Haley with a big creampie that drips down her bare cooter to leave her replete and filled with cum. 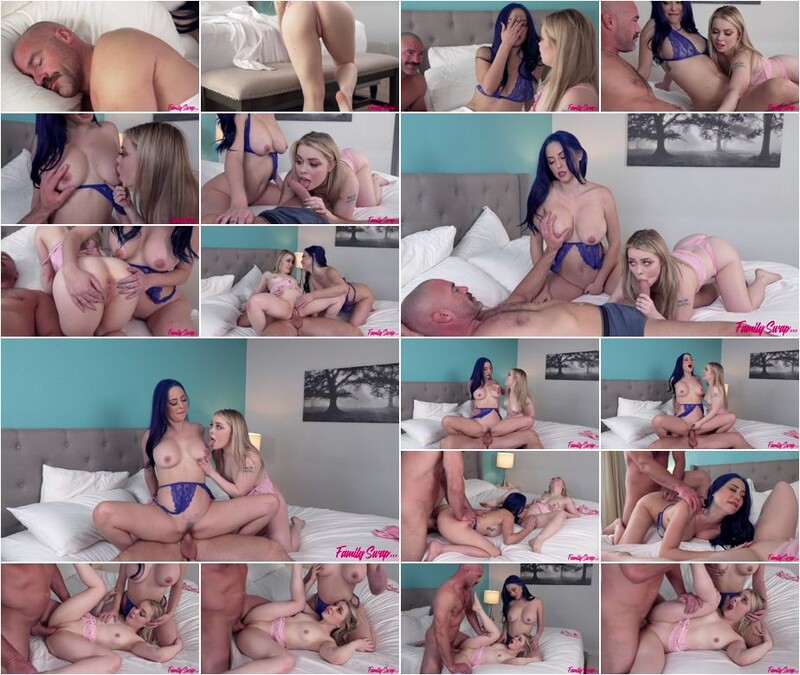