Description: What would happen if three families each contributed one member to create a new family? In this episode of Family Swap, swap parents Jessica Starling and Clark Kent have tried an intervention for their swap son Alex Mack. They want Alex to express himself more openly. Alex's swap sister, Andi Rose, walks in and asks what's going on. Alex takes that opportunity to express that he feels his swap sister has really hard nipples. Clark isn't having it, but Jessica admits she wants to stick her hands down Alex's pants. After a bit more conversation, Clark storms out. Later, Alex is in the shower when first Jessica and then Andi decide to strip down to just a towel and wait outside the door. Alex is surprised when he opens the door, but before any of them can say a word, Clark also appears in a towel. He tells the rest of his swap family that if Alex is going to get some, so is he. Jessica suggests they take it to the couch. The girls drop their towels first, with the boys admiring the full frontal view. When Andi and Jessica agree to make out, that's it for the men trying to resist. Jessica takes on Alex's cock first while Andi goes for Clark's. The girls each indulge in a lusty blow job. Then Jessica gets on her back while Andi gets on her knees so each of their partners can sink into their wet twats. When the girls swap partners so that Andi is going for Alex's dick and Jessica is going for Clark's, the guys take a seat on the couch so their girls can ride them in tandem in reverse cowgirl. Switching back to their original partners, the girls resume their places on the couch. This time Andi takes Clark's pussy pounding on her back as Jessica takes Alex in doggy. The guys can only hold on for so long; Jessica earns her creampie first, with Clark delivering Andi's a second later. Dredging their fingertips through the cum dripping from their pussies, the girls swap spit so they can each have a taste. 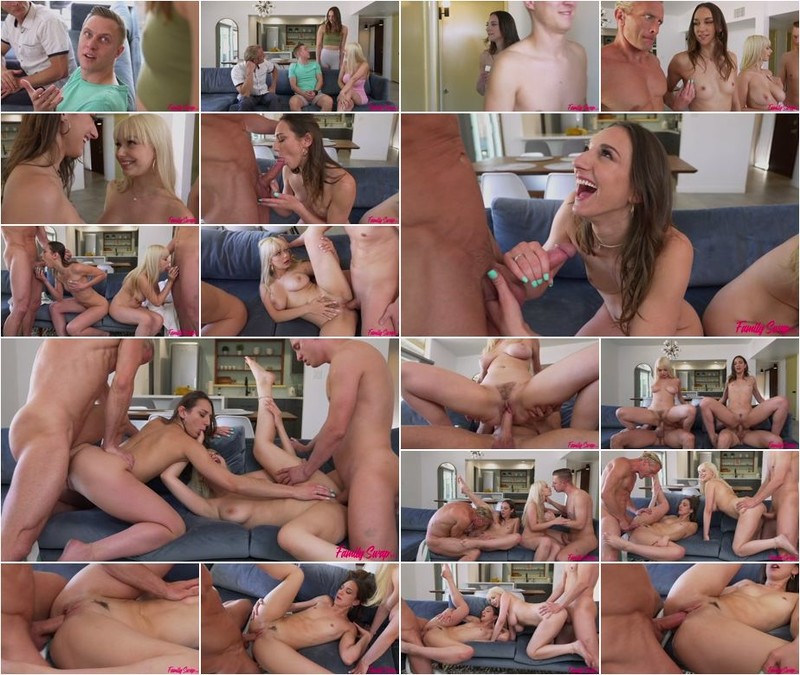 Jessica Ryan, Liz Jordan - Why Is There A Shamrock On My Dick (FullHD)