Description: What would happen if four families each contributed one member to create a new family? In this episode of Family Swap, Liv Revamped and her swap brother Juan Loco are doing an arts and crafts project for shark month. The swap siblings have made shark mouths, which opens up all kinds of possibilities for fun flirtation. When swap parents Aaliyah Love and Damon Dice walk in on the craft time, they find Juan and Liv "biting" each other's privates with the mouths. Aaliyah and Damon lecture the swap kids about appropriate behavior, then leave them alone as they duck into the kitchen for a snack and a bit of action of their own. The swap parents don't even feel like they're gone that long, but by the time they return they find Liv with her titties out and the shark mouth biting it. Juan has popped his stiffie out of his pants to put the shark mouth on his dick. Damon is about to reprimand the kids, but Aaliyah stops him. Instead, she pulls out Damon's dick and her boobs, then pus the shark mouths on her breast and Damon's cock. She tries to tell Liv and Juan to take in how stupid it all looks, but all Liv can see is how nice Damon's erection is. Feeling nice and horny, Liv tries to go for the gold but Aaliyah tries to stop her. After a bit of back and forth, Liv wins the argument that of course it's okay for them to all fuck. Aaliyah is feeling pretty horny from her kitchen flirting, so she takes on sucking Damon's dick while Aaliyah gets to enjoy blowing Juan. Now that the swap family has begun their horny adventure, they're not about to stop until they're all satisfied. Swapping partners as they move to the couch, Liv gets on her knees on the couch arm so Damon can slam into her from behind, while Aaliyah lays on her back and lets Juan give it to her. The guys take a seat on the couch so that Liv can mount Juan's hardon in reverse cowgirl while Aaliyah mirrors her with Damon. The girls switch partners again for a double cowgirl stiffie ride. When Liv gets back on the couch's arm, this time on her back, Damo can't wait to fuck that pussy again. Aaliyah climbs onto her knees on the couch so Juan can use that nice cock on her to take her from behind. After such a lusty fuck, the guys can't keep from popping for a pair of cum shots that leave the whole swap famjam totally satisfied. 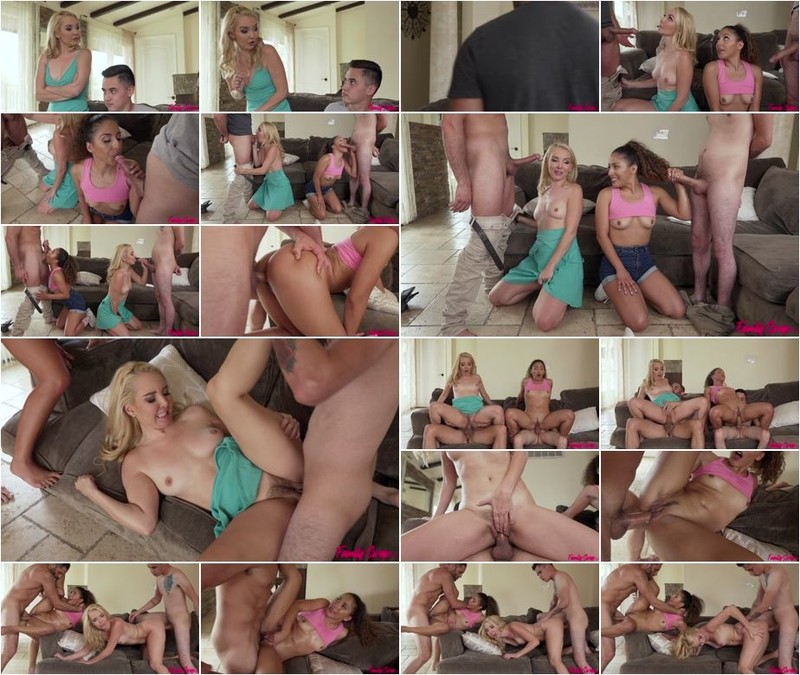 Aiden Ashley, Hime Marie - Would You Do It For A Swap Snack (FullHD)