Alex Coal, Molly Little - You Cant Get Me Off In Under Two Minutes (UltraHD/4K)

Description: Molly Little is hanging out with her friend Alex Coal as they enjoy a game of foosball. Molly's stepbrother, Rico Hernandez, can't help but perv on them. He gets more than he expected when Alex starts making suggestive hand motions on the foosball handles and the conversation shifts to giving a good handjob. When Rico makes his presence known, Alex is dismissive, saying that all guys are easy to get off. Molly tells Rico that she can get him off in two minutes, then yells at him for judging her family sex fantasy. Later, the girls are in the living room on their phones when Rico once again joins them. He addresses Alex, but pulls his dick out and tells the girls to get him off in under two minutes. Alex offers to time it while Molly jerks him off. It doesn't work! The girls swap spots, with Molly timing as Alex gives Rico a handie with her tits out. When Alex fails, too, Rico tells the girls that he's so good he can make them both cum in under two minutes. He's on. They peel off their shorts and thongs and get on the couch, where Rico puts his palms on their clits and makes them both do their best to hold the moan. Now that Alex has had one courtesy of Rico, she's not about to let the opportunity to fuck him pass her by. She gets on her hands and knees so Rico can do her in doggy despite Molly's halfhearted protests. Molly finds that watching her friend bang her stepbrother is super hot, so she leans back and rubs herself down as Alex bumps and grinds against Rico. When Alex climbs into Rico's lap for a cowgirl fried, Molly keeps diddling herself. They get momentarily interrupted by Molly's mom as Alex is switching for reverse cowgirl, but their sex must go on! They switch to missionary, at which point Molly decides she does want in on this. She tags out with Alex so Rico can give it to her until she cums nice and hard around his dick. A moment later, Rico creampies his stepsister, only to discover she's not on birth control.

Cast : Alex Coal, Molly Little
Video Name: You Cant Get Me Off In Under Two Minutes 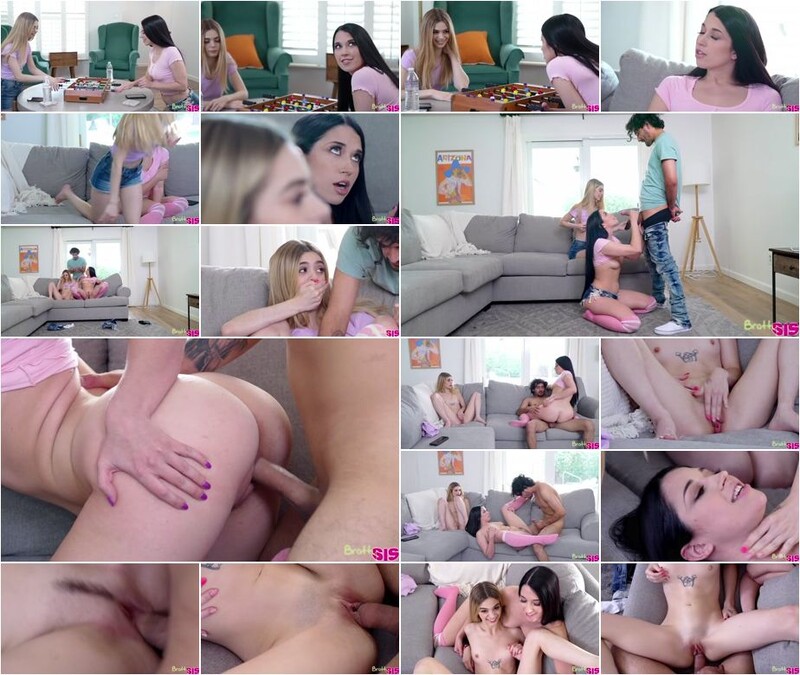 Alex Coal, Molly Little - You Cant Get Me Off In Under Two Minutes (FullHD)