Harley King - I Was Looking For Dick Pics (FullHD)

Description: Harley King is bored at home. She finally gets an idea of how to pass the time when she finds her stepbrother's cell phone just sitting, unguarded. Climbing into Ricky Spanish's bed, Harley goes into the phone and opens the photo gallery. Ricky finds his stepsister scrolling through his pictures. Tackling Harley, Ricky tries to get her to give it back. When he finally succeeds, he asks what Harley was doing with his phone. Harley confesses that she was looking for dick pics, but that she didn't find any. She asks Ricky to just show it to her. Ricky is hesitant, but game once Harley reassures him. Once she lays eyes on that big dick, Harley isn't about to let it go without a taste. She leans in and opens wide to sample her treat. One taste and she's hooked! Ricky doesn't have the heart to stop his blonde babe of a stepsis as she goes in for an enthusiastic blowjob. Now that Harley has enjoyed Ricky's stiffie, she wants him to fuck her. On her hands and knees, she curls her hands in the sheets as stepbro gives it to her in doggy. When Harley pops those lovely titties out and goes to town riding in cowgirl, Ricky gets to fill his palms with their bounty. Then Harley goes for reverse cowgirl and rocks Ricky's world as he squeezes that big behind. Ricky gets to be in charge of the pace as he delivers a deep pussy pounding to Harley as she lays on her back. Pulling out, he nuts on Harley's stomach to leave her satisfied that she's very fond of her stepbrother's dick. 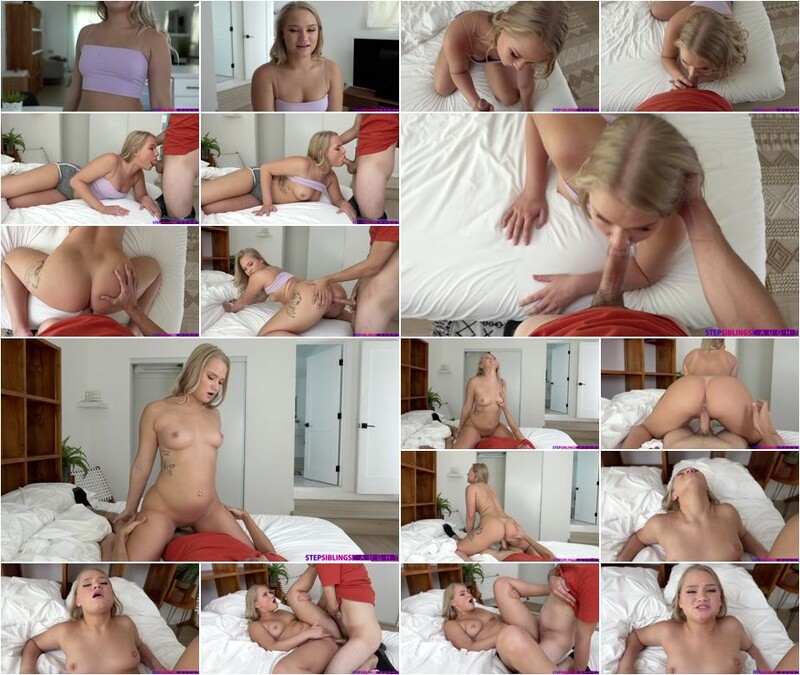