Description: What would happen if three families each contributed one member to create a new family? In this episode of Family Swap, Brianna Bourbon and her swap hubby Clark Kent want to reward their swap kids for being so good. They plate some cupcakes to bring to Ricky Spanish and Molly Little. As they enjoy the treat together, they chat about how the swap will end in just one more week, so they need to all be on their best behavior with nothing sexual going on. Molly admits that she doesn't know if she can agree to that, but they'll try. Later, Ricky breaks their promise when he walks in and sees Brianna absorbed in a book and Molly playing on her phone. He joins Molly on the couch and begins playing with her plump titties and hard nipples before outright going down on her. Molly does her best to act naturally on her phone and hold the moan to keep Brianna from noticing. When Clark walks in on that cozy little scene, he joins in on the fun by quietly seducing Brianna so he can get on his knees and finger and munch that pussy. The free use for both women continues as Ricky gets Molly on her knees to fuck her in doggy as she continues playing on her phone. Clark gives Brianna the same treatment. The guys take a seat on the couch as the continue to feign disinterest with their devices while riding them in reverse cowgirl. They finally give up the pretense as they switch partners for some cowgirl fun with Molly riding Clark and Brianna going for it on Ricky's stiffie. Hopping off to give a handie and BJ to their partners, the girls wind things down on their backs. Ricky pulls out to cover Brianna's snatch in cum, while Clark gives Molly a pussy full of creampie. 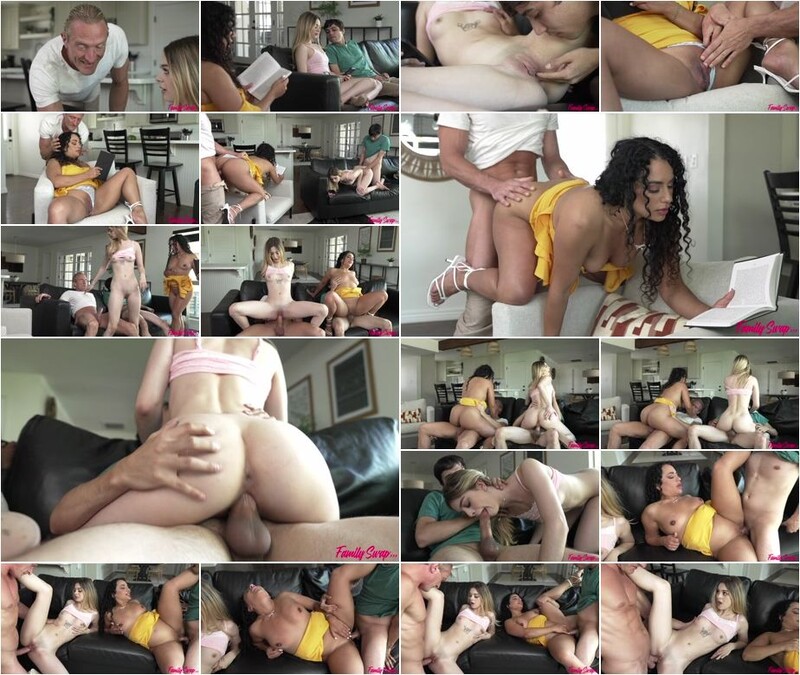