Description: Natasha Nice isn't about to be coy this Easter. This busty babe knows exactly what she wants from Robby Echo, and she knows exactly how to get it. While Robby is sitting on the couch playing on his phone, Natasha struts up to him in a sheer lacy getup and replaces his phone with an Easter basket that contains a note instructing him to fuck her. When Robby looks up and sees what his girlfriend is wearing, there's no question at all that he's happy to cave to Natasha's demands. She sweetens the pot by putting on a bit of a show. Running her hands all over her voluptuous body, Natasha plumps her big boobs and slides her fingers through her hair. By the time she pushes Robby back onto the couch, he's fully hard and ready to take her on. Natasha begins their lovemaking by popping her nipples out of her lingerie so that Robby can indulge in those tight little nubs. She gradually gets her huge boobies fully on display. Straddling Robby's legs, Natasha grabs her boyfriend's hands and puts them right where she wants them to encourage him to do more touching than looking. When having Robby knead her hands isn't enough, Natasha shoves her tits into his face so he can fully worship those sweater puppies with both hands and mouth. The couple relocates to the bedroom to get more comfortable. Robby lays Natasha down on the bed, then goes to work. He starts by removing her high heeled boots, then moves on to undoing the bottom of her teddy. With Natasha's dripping pussy fully open to him, Robby gets cozy between his girlfriend's thighs and settles in for a proper pussy feast and fingering. Delightfully hot from the ministrations of her boyfriend's tongue, Natasha turns the tables on Robby. She kisses her own juices from Robby's tongue as her hands undo his clothing. As soon as Robby's hardon has been sprung free, Natasha drops down to start sucking. Her blowjob goes nice and deep as she gobbles that dick, a clear demonstration of how horny she truly is. Another passionate kiss leaves Natasha free to roll onto her back. Leaving one leg up in the air for Robby to gently push backwards, Natasha opens herself up for everything he can give her. Robby is happy to deliver, shoving balls deep into Natasha's welcoming twat. He goes nice and deep, giving Natasha the slow and sexy treatment she craves. When the couple decides to switch it up, Robby lies down and lets Natasha take on a position of power. Straddling Robby's hips, Natasha mounts him in reverse cowgirl. There's nothing slow about her stiffie ride as she lets those big titties fly! She finishes her ride by slurping her pussy juices from Robby's dick. Getting on her hands and knees, Natasha offers herself up in another sexy position for Robby to do her. He begins by her from clit to anus. Then Robby anchors his hands on Natasha's hips and slams home in a ball slapping doggy style pussy pounding. Natasha loves it as she grinds her hips back to meet Robby's every stroke for the ultimate pleasure. Finally sated, Natasha gets on her back and shoves her massive naturals together to create a sheath. Robby straddles Natasha's belly and drives home for a titty fuck that brings him ever closer to the edge, even as he reaches down to finger bang his girlfriend. When he finally cums, Robby's jizz leaves Natasha's jugs covered in a sticky delight. Natasha rubs it all in, then turns onto her side so Robby can spoon behind her in the aftermath. 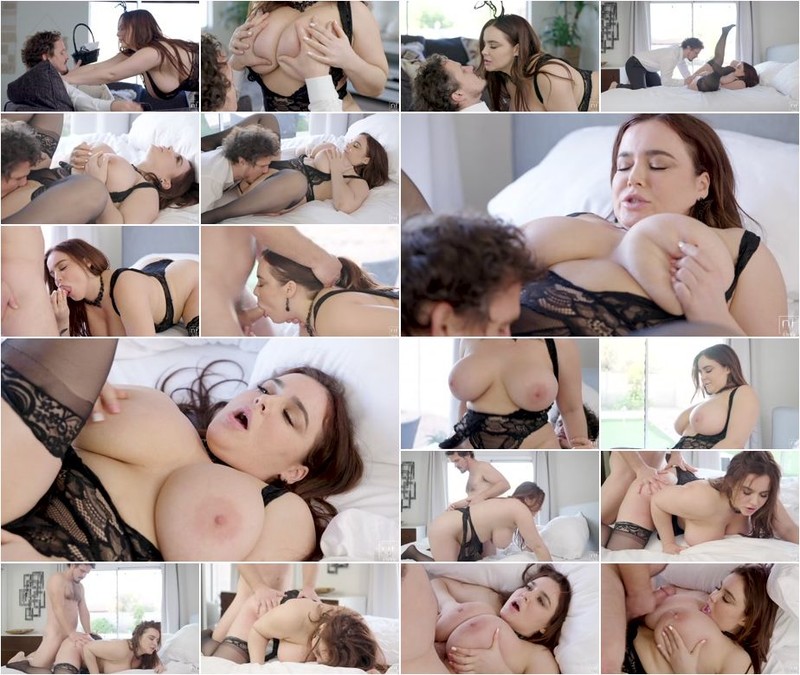