Description: Juan Loco is fortunate enough to have two stepmoms in Athena Anderson and Erin Everheart since his dad was first married to Athena and later to Erin. Athena and Erin are also good friends, so Juan gets the best of everything they have to offer. While the two stepmoms are working together to help Juan out with a project, Athena confesses that she thinks Juan is kind of cute. Erin laughs her off, but Juan overhears and realizes that he totally has an in with one of his hot stepmommies. Athena feels Juan up when he comes to sit down near her. When she feels how hard he is, Athena quietly turns around and begins sucking Juan off. Her deep throat blowjob just gets Juan even more wound up. Kneeling forward over the table to rejoin Erin in working on the project, Athena holds the moan as Juan slides into her in doggy. Erin eventually notices, and although she's initially scandalized she quickly lets Athena talk her into joining in and letting Athena eat her out. Soon, even though she knows she's married to Juan's dad, Erin wants more. Juan and Athena are happy to make it a true threesome. She spreads her thighs nice and wide to take Juan inside as Athena licks her happy little nipples. Athena takes a turn with Juan's dick making her moan as she lays cradled in Erin's arms. Then Erin gets on her hands and knees for a doggy style pussy pounding as she feasts on Athena's snatch. Finally sated, the two stepmommies get on their knees to blow and stroke Juan off until he blows his load in a double facial. 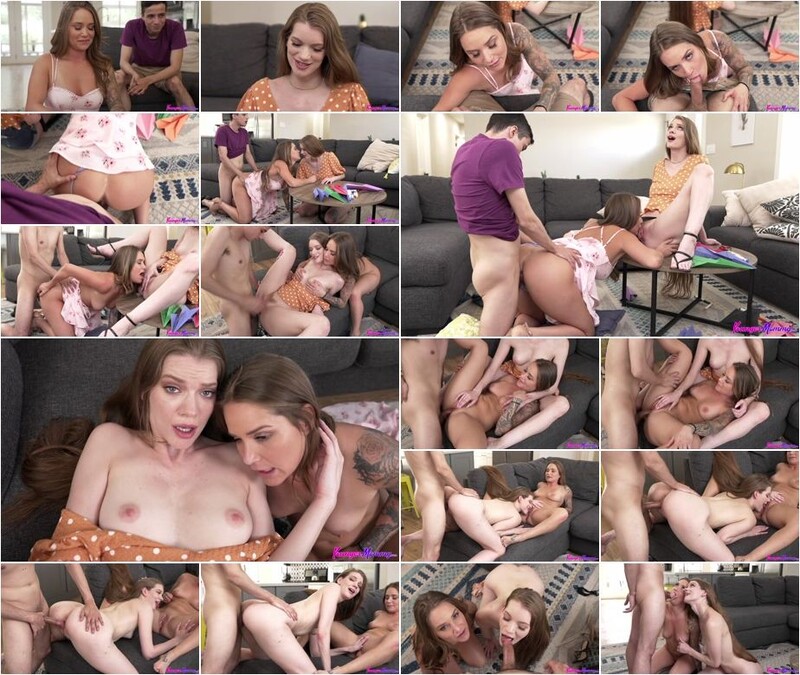