Description: Juan Loco and Paige Owens are playing a word game as they wait for Juan's stepsister, Liz Jordan, to get ready for their New Year's party. Juan complains about how long Liz is taking, but Paige just takes the opportunity to spell out lots of provocative words. Juan won't take the hint Paige is trying to lay down, so eventually she literally spells it out for him: Liz has a big crush on him and wants to fuck him. While Juan is absorbing that, Liz comes down in a do me dress. She doubles down on Paige's hint, telling Juan she's getting dicked down tonight whether it's him or someone at the party. Juan shoots back by spelling out big dick. Liz and Paige insist on seeing for themselves. Pushing Juan onto the couch, the girls pop his stiffie out and ooh and over how big it really is between slurps as they suck him down. Liz definitely gets to lead the way with Paige backing her bestie up, but both girls get some serious suck. When Liz hikes up her scandalously short skirt, Paige helps her BFF to climb onto Juan's lap and slide down until she's fully impaled. Rubbing her BBF's clit and licking her nipples, Paige helps double down on Liz's pleasure. When Liz climbs off Juan's nice D, Paige licks it clean and then climbs aboard for a stiffie ride of her own. She gets down on her hands and knees next so that Juan can give it to her from behind. As Liz moans in delight, Paige arranges herself so that Liz can muffle her moans in Paige's snatch. The girls switch it up so that Liz can enjoy Juan's hardon yet again. After making sure Liz is enjoying herself, Paige climbs up to ride Liz's mouth so her friend can tongue fuck her. As soon as Paige is fully sated, she drops down to cradle Liz's shoulders as Juan reaches his popping point. Pulling out, Juan nuts all over Liz's trimmed muff to end their threesome. 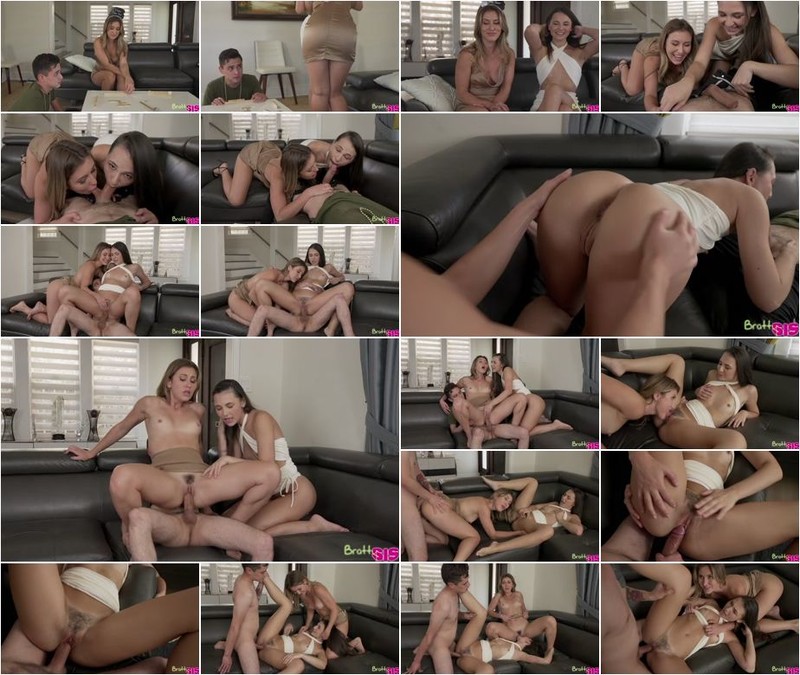 Paige Owens, Scarlet Skies - How To Play The Game (FullHD)